Lacrosse is commonly called “the fastest game on two feet”.  You can see the skills, tactics and strategies of more familiar sports such as football, basketball, hockey and soccer.  Ed Evans started playing lacrosse in 1966 and was coached by the legendary Coach Cuozzo — the high school lacrosse coach with the most wins and highest winning percentage.  Subsequently, Ed was recruited to play lacrosse for the United States Military Academy at West Point in New York.  He graduated with a degree in General Engineering and commissioned a 2nd Lt of Infantry in the Regular Army. 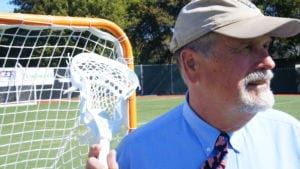 Ed’s most recent mission; the Head Coach for Men’s Lacrosse at St. Vincent de Paul High School in Petaluma.  A glowing Principal Patrick W. Daly spoke about his new coach. “Coach Evans represents integrity and strong leadership.  His positive attitude is infectious and he has a true passion for lacrosse and mentoring student-athletes.”

Principal Daly is justifiably confident in the new program.  Ed Evans has built quite a reputation, and following, around the North Bay.  He was the inaugural JV lacrosse coach at Cardinal Newman (2005-2009), coached youth lacrosse for the Petaluma Rivercats and Novato Nighthawks (2010-2014), was the Northmen BOX youth lacrosse coach (2011-2015) and JV coach for Casa Grande High School (2015-2018).  For the 2019 season, Coach Ed became Casa Grande’s Assistant Varsity Coach for “Analytics and Skill Development”.  His dedication to the sport continues at 101 Lacrosse, a youth and high school travel team (2015 to the present).

Coach Evans expects St. Vincent’s to field a very competitive Varsity team in the Vine Valley Athletic League in 2022.  Currently the league consists of Justin Sienna, Cardinal Newman, Windsor, Rancho Cotati, Casa Grande and Petaluma.  In the interim, for 2020 and 2021, boys lacrosse at St. Vincent de Paul will field a junior varsity squad.  The Mustangs have scheduled games with each of the league’s teams that have JV squads as well as games versus Berkeley HS and Novato HS.

2020 Season Update | On March 12th, St. Vincent’s played its first ever lacrosse game against Petaluma High School, a larger and more experienced team.  The result was a stunning 12-4 victory for St. Vincent’s.  The Mustangs could only roster the required 10 players with no opportunity for substitutions.  In order to manage fatigue, players rotated into different positions, took advantage of all four timeouts and practiced disciplined ball control.  Jeremy Bukolsky (’21) lead all scorers with 6 goals and 2 assists. (He also received the “Work Horse” award, presented to the player displaying the most hustle and grit.)  Jaret Bosarge had 5 goals and Alex Torres scored his first goal in an organized lacrosse game.

“I am so proud of what all of our boys did on that field…a memory that I will always hold dear”, Coach Evans reported.  “With the recent health concerns, our season is currently on hold.  Hopefully we can resume practices and play games vs Cardinal Newman, Casa Grande and Novato high schools in April and May.”

“We will build an elite lacrosse program at St. Vincent’s.  I went to a small college yet we competed at the NCAA Division 1 level,” Coach Evans declared.  He continued, “A smaller school can find success on the fields of friendly strife against larger schools with finesse, the proper temperament, sport IQ and the will of an underdog.”

Traditionally an East Coast sport, lacrosse is gaining fans on the West Coast. NCAA Division 1 colleges in the West include The University of Utah, the Air Force Academy and The University of Denver — the 2015 National Champion.  Given the youth programs in California and the level of play, Coach Evans believes that it is only a matter of time before the PAC 12 Men’s league elevates their club teams to NCAA programs. 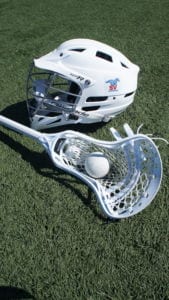 The local youth leagues and players want to play into high school and beyond.  Coach Evans expects St. Vincent’s lacrosse program to attract a core of outstanding student athletes.  An elite lacrosse program paired with St. Vincent’s strong academic reputation, small school environment and high expectations will intentionally create opportunities for the best student athletes.  Along the way, Coach Evans expects his squad to contend for league as well as regional championships.

Consistent with the St. Vincent’s tradition, it’s not just about wins and losses or notable academic outcomes.  The entire curriculum and co-curricular activities are designed to build life skills, leadership and perseverance.  Coach Evans noted, “Our players will come to appreciate the game of lacrosse, work together as a team and learn to handle pressure by focusing on critical assignments”.

“After accepting the offer to coach lacrosse at St. Vincent de Paul High School, I walked onto our beautiful turf field,” he revealed.  “It felt so right. Given my age, I realized that this would be my last high school coaching assignment…and a defining part of my legacy in the sport I love”.