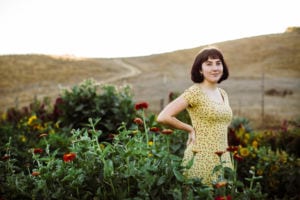 Good luck to Hunter Johnson ’19 at Sarah Lawrence College and her performance aspirations in New York.

During her time at St. Vincent de Paul High School in Petaluma, she was an accomplished student, a vocalist in the jazz band, the Vice President of Teens Against Discrimination while focusing on her true passion; theater.  During the school day, she was able to engage with a unique range of relevant classes including AP Literature, AP Art while earning Honors in Creative Writing.

Hunter attended St. Vincent de Paul Elementary School yet carefully considered which high school to attend.  “I was accepted to Marin School of the Arts, but in the end decided the small school atmosphere at St. Vincent’s was a better fit for me,” she shared.  “It provided a challenging academic environment and allowed me to engage in theater projects throughout the Northbay.”

She performed in 27 different productions primarily at Cinnabar Theater (Petaluma) and the Throckmorton Theater (Mill Valley).  At the same time, through the St. Vincent Community Service program, she donated almost 400 hours of her time volunteering as a camp counselor and student assistant director for the Young Rep program at Cinnabar Theater.

Melanie Ventilla, the Chair of the English Department and AP Literature teacher contributed, “Hunter’s extensive inquiry into the masks and guises of theatrical characters have honed her sensitivities to the throughlines of the human condition.  This manifests not only in her acting, her writings and her general analysis of texts across disciplines, but more importantly in the compassion she has towards the people around her. She yearns to think more deeply about what makes us tick as humans.”

Hunter noted that her experience at the St. Vincent de Paul Catholic Schools provided “a tremendous support system of peers and teachers that have given me a sense of confidence that I will carry with me beyond high school.  My English teachers have worked with me intensely…and helped me to see my strengths as a writer.”

REACHING BEYOND SCHOOL INTO HER FUTURE

What is less well-known about our recent graduate were two experiences she described as the most impactful of her time at St. Vincent’s.  In 2018, she was selected for the Summer Seminar for High School Juniors at the Oregon Shakespeare Festival in Ashland, Oregon. And in 2019, she was a part of the inaugural group of students to visit our partner schools in France — Vincent de Paul in Avignon and Campus Vincentien, Lycée Jeanne d’Arc in Arles. 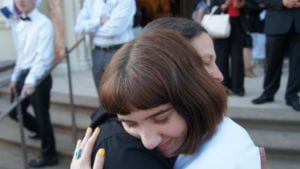 Hunter with Mrs. Ventilla at graduation

Hunter has accomplished a lot in 13 years at the St. Vincent de Paul Catholic Schools.  We wish her well in college and on the stage. We are honored to feature her as one of the many outstanding students from the Class of 2019.  Break a leg!