Kai chose St. Vincent de Paul High School in Petaluma.  He offers his advice to those considering where they will attend high school. 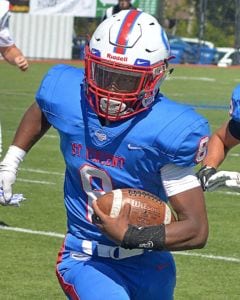 Kai is a resident of Santa Rosa and attended Wright Charter School.  Along with his twin sister, he shared that “We chose St. Vincent’s for the small school atmosphere.  The faculty and students are great.” He continued, “The 100-year tradition of excellence along with the improving athletics programs were also important considerations.  I wanted to be a part of re-building the independent football program, then play in the Northbay League (“NBL”) next year.”

Deciding which high school to attend is a critical choice for a student and their family.  St. Vincent de Paul High School offers an academic environment that encourages scholarship and college preparedness, yet is open to a variety of learners while caring for the spiritual well-being of its students,   We believe that we are one of the premier high schools in the nation, based on our students’ collective academic success.

NCS FOOTBALL FRESHMAN OF THE YEAR

It’s been an amazing first year of high school football for the hard working,  student-athlete. Many believed Kai Hall was the best freshman football player in the Northbay.  He rushed for 1,773 yards and 19 touchdowns. He ran for 100 or more yards in ten of St. Vincent’s eleven games.  His rushing total was No. 1 in the state and No. 3 in the nation for a freshman. It was little surprise when he received the Prep2Prep Freshman of the Year Award for the entire North Coast Section (“NCS”).

“Kai is just an exceptional young man.  He is all heart, a great teammate with tremendous character,” said Trent Herzog, the Varsity Head Football coach.  “Despite the attention he receives for his accomplishments on the field, he acknowledges the contributions of all the players.  After his stand-out 296 yard game, he brought the entire team cheeseburgers.”

“THE BEST CHOICE WE MADE AS PARENTS” 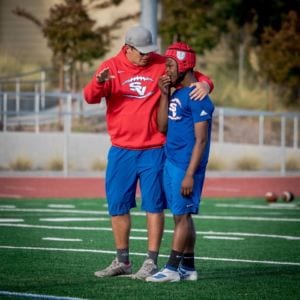 “Coming to St. Vincent’s for high school was the best choice we’ve made as parents,” his mother Natalie added.  “St. Vincent de Paul High School is an ideal environment for our children’s academic and personal development. The engagement from families, the size of school and top-tier staff provide a different experience than other local high schools.  It feels like an extended family.”

At the school long known for exceptional teachers, Kai identified his first year spanish teacher, Señora Rios as his most impactful instructor.  Kai stated with an appreciative tone, “she pushes me to try harder and drives me to do more.”

His advice to middle school students choosing where to attend high school is “to investigate a few options for high school then select the one that is the best fit for you.  It may not be the public school that is closest to your home.” Kai continued, “I felt a smaller school with great teachers, motivated peers, an aspiring sports program and opportunities to learn outside the classroom would help me in the long run.”

His stepfather Aundray commented that “the college preparatory program and high expectations are unique.  The staff and administration willingly to give up their personal time to support the students. Like a small college, there are regularly scheduled office hours.”  He added with emphasis, “They are truly invested in the student’s future.” 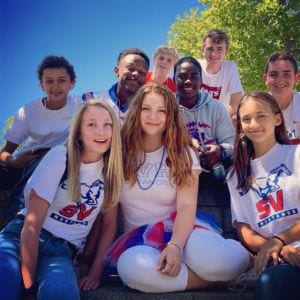 Kai has a 3.0 GPA and has set his sights on a four-year college and the opportunity to play Division I football.  And then Kai shared his highest aspiration; “When I am done playing football, I want to become a teacher at St. Vincent’s.”

St. Vincent de Paul High School in Petaluma is striving for excellence and making a difference in the lives of its students.  We have the highest graduation requirements among all high schools in the Northbay, 46% of our students receive some form of financial assistance and over the last five years, our graduates were awarded $16.9M in college scholarships.  You can learn more in this report from the Board of Regents entitled “A Focus on Growth”.

Freshman Kai Hall has accomplished a great deal in just one semester at St. Vincent de Paul High School.  We are proud to feature him as one of the outstanding students from the Class of 2023.